On 14 May 2019 we drove north from Durham across the border to Edinburgh, taking a detour to look Hadrian’s Wall and to visit Wallington Hall, a National Trust property in Northumberland. It was warm and sunny, a glorious spring day.

We had started well, with what was always called a ‘full English breakfast’, the works in other words, from orange juice to coffee via cereal and a large plate of toast, eggs, sausages, bacon, mushrooms, and more, which in Peter’s case also included black pudding. One of the joys of staying in bed-and-breakfasts in England is the F.E.B. You’ve had your main meal of the day, you don’t need lunch, and you can drink your way through a few gins for dinner with an easy conscience.

Greg and I had stood on Hadrian’s Wall, at Housteads Fort, thirty years ago, on 3 April 1989. It was blowing a blizzard: an awfully cold spot for a centurion in a miniskirt, we thought. This time though, it was warm enough for any sort of daring outfit: get yourself pict out in a thin coat of blue paint would be enough. Steel Rigg, where we’d gone on the recommendation of our B&B hosts, had magnificent views of the Wall following the line of crags for miles across the bare hills. 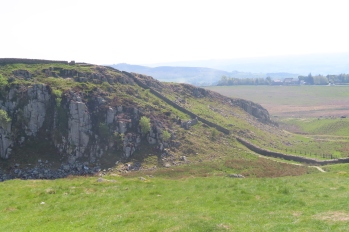 Wallington Hall, near Cambo in Northumberland was the family seat of the Trevelyan baronets. It is a 13,000 acre working estate, with a woodland and a large walled garden. The Hall has superb pre-Raphaelite frescos and a number of collections and curiosities, including an army of 3,800 lead soldiers. Sir Charles Philips Trevelyan (1870 – 1958) was a socialist who, with the prouncement that ‘I do not believe in private ownership of land. By pure chance I own Wallington. I regard myself solely as a trustee for the community’, gave Wallinton to the National Trust in 1941.

Wallington: one of the William Bell Scott paintings: In the 19th century the Northumbrians show the world what can be done with Iron and Coal. The left hand worker is a portrait of Charles Edward Trevalyon. The painting was completed in 1861. 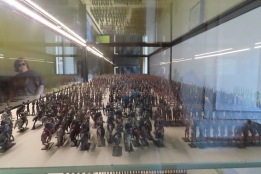 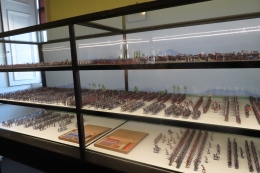 The Trevalyons had 3,800 lead model soldiers bought in the 1880s. They were made in Germany. The three sons would set them out following the plans of actual battles of Marlborough and the Napoleonic Wars. Books were used for hills. They calculated firepower of the guns and agreed the number of soldiers laid low at each volley. A battle took several days to complete. 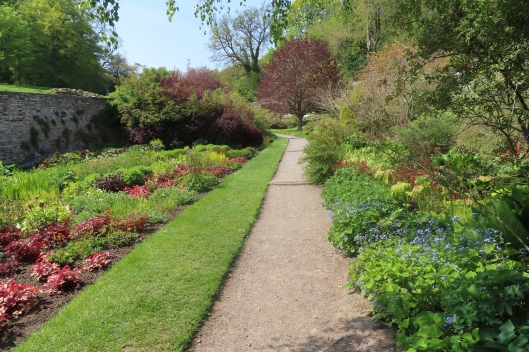 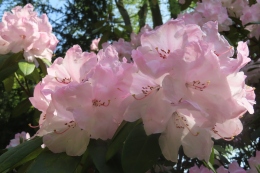 From Wallington we drove on to Edinburgh, stopping at the Scottish border to admire the magnificent view. It was hard not to recall Dr Johnson’s joke that among the many fine prospects offered by Scotland, ‘The noblest prospect which a Scotchman ever sees, is the high road that leads him to England.’

view from the Scottish border

Our flat in Edinburgh, near Holyrood Palace and the Royal Mile, was small but well located. Charlotte said her bedroom was like sleeping in a cupboard. She was told firmly that in Yorkshire they dream of sleeping in cupboards.

Dinner, just along the street at the ‘Kilderkin’ pub, was a sampling of Scottish gins. 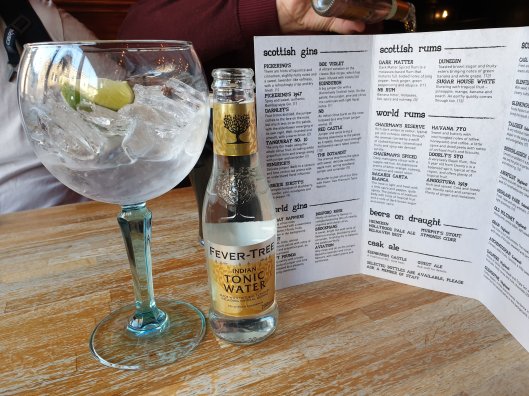 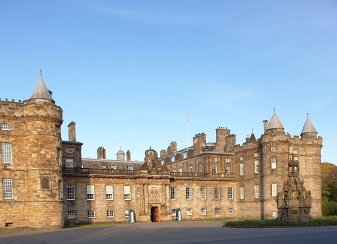 flowers in the lawn at Holyrood Palace

Holyrood Palace: Armorial panel of King James V (1512 – 1541), father of Mary Queen of Scots. I R 5 stands for James V. The unicorn is the national animal of Scotland and was first introduced to the royal coat of arms of Scotland around the mid-1500s.

14 May 2019 Google timeline map: our drive north from Durham to Edinburgh via Hadrians Wall (Steel Rigg near Henshaw) and Wallington.

2 thoughts on “The Youngs invade Scotland”