The wife of my first cousin 5 times removed. A fascinating story retold by the Friends of Teignmouth Cemetery.

Teignmouth Tales from the Grave

What an incredible story we have unearthed today!

On 6 January 1842, 16,000 members of the British Kabul force, the `Army of the Indus’, fled from Kabul under a “shameful capitulation and the illusion of safe-conduct” promised by the eastern Afghan tribes. One week later, on 13 January, Surgeon William Brydon rode alone into Jellalabad, apparently the only British survivor. It has been described as the worst British military disaster until the fall of Singapore a century later and upto that time the greatest defeat ever inflicted on the British by an Asian enemy. 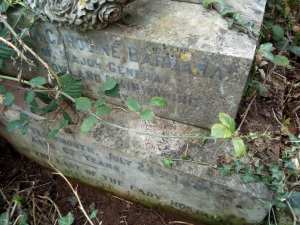 On 15th August 2017 Geoff Wood, a member of the Friends of Teignmouth Cemetery, discovered the overgrown grave of Georgiana Caroline Barbara Mainwaring. She was the wife of Major-General Edward Rowland Mainwaring of the Bengal Army. On her headstone she is decribed as “the last of the lady…