Trove  is a repository of digitised data managed by the National Library of Australia.

Recently when I was researching Trove’s digitised newspapers, I came across a newly-added photograph of my great aunt Nancy de Crespigny.

The photograph comes from the State Library of Australia. It was taken 8 March 1936 by Charles Pearcy Mountford (1890-1976) at Salt Creek, also known as also known as Winnininnie Creek, about 330 kilometres north of Adelaide.

The photo of Nancy is in the Mountford-Sheard Collection. In the same collection I found two shots of Nancy’s future husband Hallum Movius (1907-1987) taken on the same day.

The Adelaide Advertiser of 11 March 1936 mentions Nancy and Hal’s excursion. With them was the Adelaide anthropologist Charles Pearcy Mountford (1890-1907) .

A few months later, in June, Hal sailed from Australia. Nancy followed in July. In September the pair married in London. 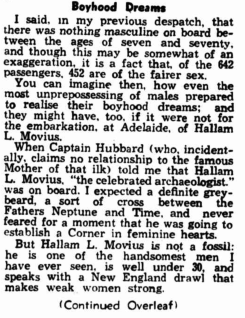 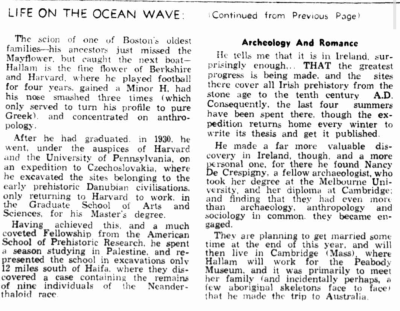